Angels and Demons on a Pinhead

Posted on February 7, 2007 by PlatoHagel

Of course I had to point to the cosmological understanding that took us to this “geometrical understanding of things that are large.” But this is to be short, while I crunch the thoughts of the process to the pinhead. You can follow the “picture links” and learn more on your own time.

In either case, gravity acting in the hidden dimensions affects other non-gravitational forces such as electromagnetism. In fact, Kaluza and Klein’s early work demonstrated that general relativity with five large dimensions and one small dimension actually predicts the existence of electromagnetism. However, because of the nature of Calabi-Yau manifolds, no new forces appear from the small dimensions, but their shape has a profound effect on how the forces between the strings appear in our four dimensional universe. In principle, therefore, it is possible to deduce the nature of those extra dimensions by requiring consistency with the standard model, but this is not yet a practical possibility. It is also possible to extract information regarding the hidden dimensions by precision tests of gravity, but so far these have only put upper limitations on the size of such hidden dimensions.

How many would have thought that such a micro-perspective could have been ever be taken down to “this level” and found an analogy that is suitable? You needed something more here to consider, yet, I will call it “angel and demons” for those who like the mystery. 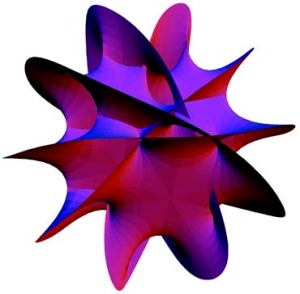 I will try and spell out what is happening at such a microperspective level. You might wonder, how did such ideas become what is, “the good and evil of the world” is really a part of the dynamics that we see geometrically enhanced, as we delve ever deeper into this mystery of reductionism and such. On how, we may look at cosmology that “is different” with this perspective.

At some point, those considering “all this energy” and the way reduction is assigned to the energy at all levels, what shall any calorimetric pick up as such collision processes seek to define “every contact” as we want to “map the pinhead” accordingly?

Lubos Motl saids that he sees the relation to such dynamical situations as “fruitful research” toward the understanding of the cosmological descriptions implied from such micro states. To have it listed according to a “geometrical perspective” we might be able to assign each universe? Okay! He did not say that exactly, so check into his blog entry for an update.

I’d like to thank Quasar9 for reporting on this as well.

My thoughts have been there toward reductionism’s more cosmological counterpart for some time now. So I enjoy, that the views that I have had about the microperspective have indeed been sanctioned at some science level according to the scientist in the know. Yes, I can prove my thoughts here for you, so you know what I mean.

The star Eta Carina is ejecting a pair of huge lobes that form a “propeller” shape. Jet-like structures are emanating from the center (or “waist”), where the star (quite small on this scale) is located.

Now it is indeed a “greater depth of perception” that asks us to delve into the microperspective of string world. How is it the cosmological world can have such similarities, while the story of the Calabi Yau, makes itself a headlight news current in the research of string theory?

The First Few Microseconds, by Michael Riordan and Willaim A. Zajc

During those early moments, matter was an ultrahot, superdense brew of particles called quarks and gluons rushing hither and thither and crashing willy-nilly into one another. A sprinkling of electrons, photons and other light elementary particles seasoned the soup. This mixture had a temperature in the trillions of degrees, more than 100,000 times hotter than the sun’s core.