Just thought I would add this for consideration. Grace satellite does a wonderful job of discerning this feature? Amalgamating differing perspectives allows one to encapsulate a larger view on the reality of Earth. More then the sphere. More then, what Joseph Campbell describes:

The Power of Myth With Bill Moyers, by Joseph Campbell , Introduction that Bill Moyers writes,

“Campbell was no pessimist. He believed there is a “point of wisdom beyond the conflicts of illusion and truth by which lives can be put back together again.” Finding it is the “prime question of the time.” In his final years he was striving for a new synthesis of science and spirit. “The shift from a geocentric to a heliocentric world view,” he wrote after the astronauts touched the moon, “seemed to have removed man from the center-and the center seemed so important…

While one can indeed approximate according to the spherical cow, in terms of events in the cosmos, I was being more specific when it comes to demonstrating a geometrical feature of the sphere in terms of the geometry of the Centroid. This feature is embedded in the validation of the sphere in regard to gravity? 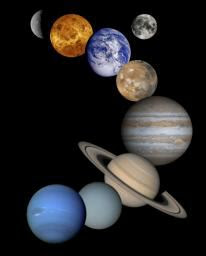 Planets are round because their gravitational field acts as though it originates from the center of the body and pulls everything toward it. With its large body and internal heating from radioactive elements, a planet behaves like a fluid, and over long periods of time succumbs to the gravitational pull from its center of gravity. The only way to get all the mass as close to planet’s center of gravity as possible is to form a sphere. The technical name for this process is “isostatic adjustment.”

With much smaller bodies, such as the 20-kilometer asteroids we have seen in recent spacecraft images, the gravitational pull is too weak to overcome the asteroid’s mechanical strength. As a result, these bodies do not form spheres. Rather they maintain irregular, fragmentary shapes.

It was important to see how such planets form and given their “Mass and densities” which I thought to show how such a valuation could be seen in relation to the variance of gravity so it is understood.

Isostasy (Greek isos = “equal”, stásis = “standstill”) is a term used in geology to refer to the state of gravitational equilibrium between the earth’s lithosphere and asthenosphere such that the tectonic plates “float” at an elevation which depends on their thickness and density. This concept is invoked to explain how different topographic heights can exist at the Earth’s surface. When a certain area of lithosphere reaches the state of isostasy, it is said to be in isostatic equilibrium. Isostasy is not a process that upsets equilibrium, but rather one which restores it (a negative feedback). It is generally accepted that the earth is a dynamic system that responds to loads in many different ways, however isostasy provides an important ‘view’ of the processes that are actually happening. Nevertheless, certain areas (such as the Himalayas) are not in isostatic equilibrium, which has forced researchers to identify other reasons to explain their topographic heights (in the case of the Himalayas, by proposing that their elevation is being “propped-up” by the force of the impacting Indian plate).

In the simplest example, isostasy is the principle of buoyancy observed by Archimedes in his bath, where he saw that when an object was immersed, an amount of water equal in volume to that of the object was displaced. On a geological scale, isostasy can be observed where the Earth’s strong lithosphere exerts stress on the weaker asthenosphere which, over geological time flows laterally such that the load of the lithosphere is accommodated by height adjustments.

Such strength variances can be attributed to the height with which this measure is taken(time clocks and such) and such a validation in terms of Inverse Square Law goes to help to identify this strength and weakness, according to the nature of the mass and density of the planet.

As one of the fields which obey the general inverse square law, the gravity field can be put in the form shown below, showing that the acceleration of gravity, g, is an expression of the intensity of the gravity field.

It is important then such a measure of the energy needed in which to overcome the pull of the earth, then was assigned it’s energy value so such calculations are then validated in the escape velocity. There are other ways in which to measure spots in space when holding a bulk view of the reality in regards to gravity concentrations and it locations.