However, the incommensurability thesis is not Kuhn’s only positive philosophical thesis. Kuhn himself tells us that “The paradigm as shared example is the central element of what I now take to be the most novel and least understood aspect of [The Structure of Scientific Revolutions]” (1970a, 187). Nonetheless, Kuhn failed to develop the paradigm concept in his later work beyond an early application of its semantic aspects to the explanation of incommensurability. The explanation of scientific development in terms of paradigms was not only novel but radical too, insofar as it gives a naturalistic explanation of belief-change. Naturalism was not in the early 1960s the familiar part of philosophical landscape that it has subsequently become. Kuhn’s explanation contrasted with explanations in terms of rules of method (or confirmation, falsification etc.) that most philosophers of science took to be constitutive of rationality. Furthermore, the relevant disciplines (psychology, cognitive science, artificial intelligence) were either insufficiently progressed to support Kuhn’s contentions concerning paradigms, or were antithetical to them (in the case of classical AI). Now that naturalism has become an accepted component of philosophy, there has recently been interest in reassessing Kuhn’s work in the light of developments in the relevant sciences, many of which provide corroboration for Kuhn’s claim that science is driven by relations of perceived similarity and analogy to existing problems and their solutions (Nickles 2003b, Nersessian 2003). It may yet be that a characteristically Kuhnian thesis will play a prominent part in our understanding of science.

Anomaly and the Emergence of Scientific Discoveries Kuhn now moves past his initial topic of paradigm to scientific discovery saying that in order for there to be a discovery, an anomaly must be detected within the field of study. He discusses several different studies and points out the anomaly that invoked the scientific discovery. Later in the chapter he begins to discuss how the anomaly can be incorporated into the discovery to satisfy the scientific community.

There are three different characteristics of all discoveries from which new sorts of phenomena emerge. These three characteristics are proven through an experiment dealing with a deck of cards. The deck consisted of anomalous cards (e.g. the red six of spades shown on the previous page) mixed in with regular cards. These cards were held up in front of students who were asked to call out the card they saw, and in most cases the anomaly was not detected.(link now dead)

See if you recognize the validity of what I am saying, then you would have to know something a little bit more about the person who uses the name of Plato. Is to understand, that I was already given an anomalous event within my own life. It rocked the very foundation in face of all that science has given me.

The Observer. I never gave it much thought other then to see that while it is very subjective in the terms that I  may explore consciousness.  There is a obvious meaning of the term in the sciences that  needed to be explained. I do understand that context in terms of measure,  but I understand as well,  that any subjective state asks how it is that in the chaos of these subjective symbolisms,  how is one to be able to make sense of the language used? It is obviously not the language of mathematics and physics.

A number of interpretations of quantum mechanics, notably “consciousness causes collapse“, give the observer a special role, or place constraints on who or what can be an observer. For instance, Fritjof Capra writes:

“The crucial feature of atomic physics is that the human observer is not only necessary to observe the properties of an object, but is necessary even to define these properties. … This can be illustrated with the simple case of a subatomic particle. When observing such a particle, one may choose to measure — among other quantities — the particle’s position and its momentum” [1]

However, other authorities downplay any special role of human observers

“Of course the introduction of the observer must not be misunderstood to imply that some kind of subjective features are to be brought into the description of nature. The observer has, rather, only the function of registering decisions, i.e., processes in space and time, and it does not matter whether the observer is an apparatus or a human being; but the registration, i.e., the transition from the “possible” to the “actual,” is absolutely necessary here and cannot be omitted from the interpretation of quantum theory.”[2]

Critics of the special role of the observer also point out that observers can themselves be observed, leading to paradoxes such as that of Wigner’s friend; and that it is not clear how much consciousness is required (“Was the wave function waiting to jump for thousands of millions of years until a single-celled living creature appeared? Or did it have to wait a little longer for some highly qualified measurer – with a PhD?”[3]).

In science, the term observer effect refers to changes that the act of observation will make on a phenomenon being observed. This is often the result of instruments that, by necessity, alter the state of what they measure in some manner. A commonplace example is checking the pressure in an automobile tire; this is difficult to do without letting out some of the air, thus changing the pressure. This effect can be observed in many domains of physics.

The observer effect on a physical process can often be reduced to insignificance by using better instruments or observation techniques. However in quantum mechanics, which deals with very small objects, it is not possible to observe a system without changing the system, so the observer must be considered part of the system being observed. 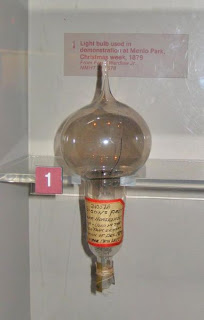 This entry was posted in Uncategorized and tagged Consciousness, Naturalism, Tesla, The Six of Red Spades, Thomas Kuhn. Bookmark the permalink.

5 Responses to The Observer