Could "Chaos" have been Implied in the Quantum Harmonic Oscillator, as Supersymmetry? 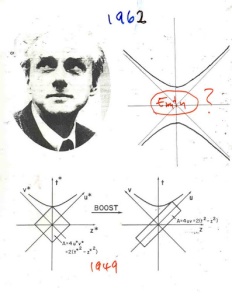 Fortunately being the junior here in knowledge comprehension, the benefits, as of my having wrongly thought a certain way, allows “fantasy a great journey.” I have wondered, could I have ever attained such insights that would awaken even the most determined individual to the quest of, to finally rest easy and a warm satisfaction?

Let’s hold the Trigger in suspension. What is it’s potential, had such symmetrical realizations made the axis of this process move according to some plan not seen? Are There methods seen in the matrices, that revolve around this “i” that woud have given the photon dispersement some relevance to a interactive phase within context? How about gluon perceptions? Tipler’s lightcones also comes to mind here, as such a process?

I am so afraid to trip on my tongue, that such words listed, would have provided the necessary crackpot label. I wondered whether I should continue. But a motivation is borne of it’s own accord, I couldn’t help see some relevance to the “uncertainty in langrange points.”

Although chaotic planetary motion had not been observed, experimentalists had encountered turbulence in fluid motion and nonperiodic oscillation in radio circuits without the benefit of a theory to explain what they were seeing.

Could have exemplified such unequilibrium, that at first, it made no sense to me that such points could have ever accomplished anything. Was there a lesson from lorentz and his model butterfly that such models had found the transfer from one state to another, could reveal such supersymmetrical acts of consideration in having found the anti- anything, and soon learnt, that it was the other side of the equation? The 720 degree turn, that brought the history of this action into a complete whole, and accord.

I would like to say this is nice to see that Lee Smolin has taken the time to help set things straight. This caught my eye.

This is linked to a Post written by Peter Woit called, ” Why No New “Einstein”?

6) With regard to the non-standard quantization, in which holonomies, but not local field operators are well defined, it is of course true that when applied to standard systems this leads to inequivalent results. “This apparently leads to unphysical consequences, such as an unbounded spectrum for the harmonic oscillator.” But, give me a break, do you really think someone is proposing to replace the standard quantization of the harmonic oscillator with the alternative one? What is being proposed is that the quantization used in LQG is well suited to the quantization of diffeo invariant gauge theories.

In case it is not obvious, let me emphasize that harmonic oscillators are not relevent here, and can play no role in a background independent quantum theory, precisely because the division of a field into harmonic modes requires a fixed background metric. Thus, the physics of the problem REQUIRES an alternative quantization.

I have to read things over quite a few times before it seems to sink in, but reference to three sphere and the understanding of Poincare’s model did not reduce my interest in seeing such correlations in how we saw such langrange points develope into this suspended state for the trigger to make itself known?

“There’s no question that the Auger observatory will be sensitive to this signal, if it exists,” says Penn State’s Stéphane Coutu, a member of the international Auger Observatory team. “We’ll definitely look.”

All of us are on the same wavelenght right? Blackhole determinations, set the stage, for what we hope to percieve is, “the basis of this trigger?”

How wonderful this rubber band that is slipped over the sphere, and as it expands from this point, “the loop” now becomes a exemplifier of all those things manifested from the spherical gaze of the harmonics?

What image is given from the blackhole to realize, that the gravitonic messager sent from the daisy of Taylor, would have found the penduluminaric thoughts in Greg’s Egans’s “animations of Lissajous” and a coordinated frame?