What Good are Mathematics in the Real World?

Came across this article at Clifford of Asymptotia blog( doesn’t this have an “ole English sound” to it?:).

The first article? It’s a discussion of some of the things I’ve been telling you about in recent times. Applications of string theory to various pieces of physics in a wider realm of physics than you normally hear string theory being discussed. There’s a lot of excitement about the usefulness of various techniques in string theory for understanding certain aspects of nuclear physics being experimentally probed, and also growing excitement about possible string theory approaches to a variety of systems in condensed matter physics.

To me following as a lay person it is indeed impossible to capture all of what the good science people have venturing forward in terms of conceptions that have formed from this mathematical prowess and excursion into the abstract.

Not saying I haven’t followed the conversations of the likes of Jacques Distler and Clifford Johnson together with Lee Smolin on the idea of Genus figures that appear at the valleys, but of the limitations that Lee fell short of in response to where Stanley Mandelstam was in the research is part of the addendum that needs to be added to perspective synoptic books already written. Just the keeping up to date aspect of wha is current and happening in regard to String Theory. 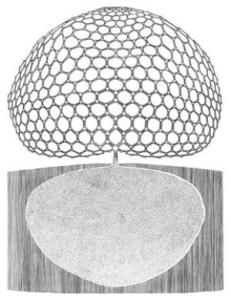 String theory might help us understand how mystery materials like high-temperature superconductors work (Illustration: Samuele Bastianello’)STRING theory: you love it or loathe it. To some it represents our best hope for a route to a “theory of everything”; others portray it as anything from a mathematically obtuse minefield to a quasi-religion that has precious little to do with science.

There might be a middle way. String theory’s mathematical tools were designed to unlock the most profound secrets of the cosmos, but they could have a far less esoteric purpose: to tease out the properties of some of the most complex yet useful types of material here on Earth.

Both string theorists and condensed matter physicists – those studying the properties of complex matter phases such as solids and liquids – are enthused by the development. “I am flabbergasted,” says Jan Zaanen, a condensed matter theorist from the University of Leiden in the Netherlands. “The theory is calculating precisely what we are seeing in experiments.”

If solid science does turn out to be the salvation of string theory, it would be the latest twist in a tangled history. String theory was formulated in the late 1960s to explain certain features of the strong nuclear force, one of four fundamental forces of nature. It holds that electrons, quarks and the like are not point-like particles but minuscule, curled-up, vibrating strings. No sooner had this idea emerged, though, than it lost ground to particle physicists’ “standard model”, which proved capable of describing not just the strong force but also the weak and electromagnetic forces – and did so far more intuitively through the interactions of point-like quantum particles…… See more here

I know it makes no sense when thinking about extremities of heat and cold in terms of the superconductors but for me if cooling was an attribute of the necessity of particle collisions, it held in my mind that the extra dimension were the loss of energy that were possible about the current states in the conductors themselves. It had holes( special kind of holes dimensionally related) that allowed this leakage of energy even though it was encased as it was, as to the displayed in the cavity of particle spreading discernment.

So I arrived at this conclusion some time ago understanding that a limit had to have been reached in terms of the reductionist principle even though perspective had been reduced from the First Three Minutes of Steven Weinberg to the First Three Microseconds. So it was this that what is compelling to me “was a place where” transference of neutrino oscillation toward the time of muon revealed could have arisen out of the neutrino beam. I am thinking of Gran Sasso here, as well as, all the experiments currently unfolding with regard to IceCube and Sno.

Cascading particle dissemination was a point of correlation in my understanding of what “places nature” had provided us in terms of the spreading of “contact of high energy particles in our atmospheres” that we could study Cerenkov in the mediums that we do in ice and water as well describe this correlation in the LHC.

But here’s the rub for me, that containment of perspective in the cosmological box, was and is held in comparison to what precedes this universe, is asking that Veneziano suggests an earlier time and corresponds to perspective being push back.

But push back to where? For the cosmologists it was not sufficient that such entertainment exist, yet that such a state and place to exist was a fundamental realization of the ball rolling down the hill to correlate with the universe. Was to relate to all possible universes. Was to relate to the scope and travel of abstraction in relation to a Genus figure.