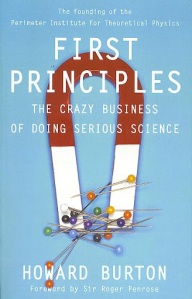 After returning home from our little vacation, I’ve hunkered down to read, and I thought this would be a good time to come to know of the Perimeter Institute for Theoretical Physics in Canada and how it started up.

As you know I’ve linked the Q2c site coming in September as well as I think after ten years this Institute has done a very good job of promoting a science based view toward the latest in the science frontiers.

In his remarks on behalf of the Government of Ontario, The Honourable John Wilkinson, Minister of Research and Innovation said: “Ontario’s $3B Innovation Agenda focuses on our government acting as a catalyst to support our top researchers and entrepreneurs – extraordinary people like Mike Lazaridis who are leading the way to turn groundbreaking ideas and innovation into Ontario’s next generation of jobs. Ontario’s commitment to fundamental and applied research has not only been informed but also inspired by Mike’s personal commitment to innovation, and his contributions to the Perimeter Institute. That’s why our government has already invested over $65M to support this important initiative. This new investment will strengthen the Institute and the government-industry partnerships that have made it possible, and help us to continue to attract the world-class talent and the scientific knowledge Ontario needs to compete in the 21st century.”See: Mike Lazaridis Donates Additional $50 Million to Perimeter Institute

Now you should know that I had received earlier notice of Howard’s book from Bee of Backreaction. I have always been under the notion that what can be learnt can be learnt from all ages and there is no one aspect that we can not learn from, when we read and write about the thoughts of bloggers who have something to share with regard to their own journeys.

The book tells the story of the first years of Perimeter Institute. From Mike Lazaridis’ donation, over the search for a name, for a mission, for a location, the joy of building constructions, the hiring of the first faculty members, the establishment of PI’s public outreach program, and the successful acquisition of governmental funding, to Howard’s departure.

It is very entertainingly written and quite informative in addition, though I admittedly had hoped for more gossip stories about the research and the researchers. The chapter about who talked to whom when and where to pull the strings for governmental support is somewhat lengthy and tiresome, but provides interesting inside views. The book also has an amusing chapter titled “The Trouble with Physicists” about the difficulties in saving scientists from administrating themselves into dysfunctionality. I’m very tempted to quote the funniest paragraphs, but I think you should read the book yourself. It comes with some characterizations of well-known physicists that are quite to the point indeed.

The book is probably more interesting if you know some of the people involved, but besides this it conveys authentically and passionately the fascination, joy and importance of theoretical physics. Overall recommendable. If this was an Amazon review, I’d give 5 stars.Howard Burton: First Principles

I think this is what I like most that what can be revealed in our blogging encounters, that what was written can go out toward the public to what had be done for me in the exposure of a book. I scoured the bookshop shelves for something interesting to read about science. Of course, in this case it was Howard’ Burton’s book First Principles.

I have been watch this developing institution as well. In a weird sort of way feeling quite proud that such an institution was given impetus out of which an appreciation for developing of the science perspective was displayed here in the north, by Lazardis

I really don’t think it is a Ivory Tower that is being described while Turok resides in his position. Just that what you do as a theorist is brought in line with cosmology. It’s much like working the LHC and see that it is working from two perspectives, not just one.

I don’t see anything wrong with that.

Nice to see a few prominent names like Susskind, Hawking and Hooft associated with PI.

When I seen the name of the book and the time you spent at PI Howard I was drawn to the idea of what Condense Matter theorists spoke of, in the same way Robert Laughlin looked at how he might describe the “foundational basis” that Phil was talking about.

Witten and others understood the condensed matter point of view as well.

Again I will read the book once finding it.

Now you must know something about this lay person who writes this blog. Previous to Howard’s selective title I came across this term when I was looking for some basis as if in equatorial description that was simple to think it has some relation in algorithmic proportion that this could be the basis of all organization thought that could have exploded amongst the computer world. The very essence and core of our being as it was translated to reveal the very nature of who we are as beings.

This is when I came upon my own “Correlations of Cognition,” as the condense matter theorist came to mind. I saw this relevance in how organization could be thought of at a fundamental level. Here in this case, “string theory” held my mind. So when I seen Howard’s title of his book it resonated with me, for this is something that had stayed with me for years as I’ve remained part of the blogging experience of scientists and their engagements with each other.

How is it you then I could not learn to think, that by experiment, that one could line up two counter and oppositional points of view, to see what can be held as truth, and what remains as abstraction of the theoretical division of exploration. You know that what can reside internally as to the mode of operation as to what is self evident(arche), is something that you can place in the external world as well.

So Howard and young students become “mindful of the conduct becoming” and we see this value orientation as to the discussions between scientists. Some students become discouraged and subtle voices strain to speak,”May the ole work horses die?”:)

Anyway I am on page 47 for those readers that have their books. I recognize some aspect of what Mike Lazaridis likes in Howard as to the letter he wrote, preparing the way for his future as to what? I see this fateful discerningly as to a course of action, to much in how after serving their time in the academics, that they must make their way to the financial responsibility toward providing food and sustenance to the family. No fooling around now is there.

So the letter is a spark of genius in terms of putting it out there for hire. Mike Lazaridis recognized something in himself, in what was written by Howard Burton. Mike Lazaridis although an engineer, was was much like him? Avenues to freedom then were the ability to put together a plan once accepting the job, and Howard ability to get to work even though it didn’t seem like Howard Burton had a job, was exactly what Mike seem to me what he was looking for.

I liked Chris Isham too, in his explanations, and toward this regard, Chris Isham reminded me of Penrose. I found it kind of odd that later on as Howard is making his way gathering information on Institutes that when again visiting Isham that there was a distance and unknowing attribute of who Howard was? I find this strange when mentioning about his wife and who was meet first as to consequence of saying?