…the creative principle resides in mathematics. In a certain sense therefore, I hold it true that pure thought can grasp reality, as the ancients dreamed.Albert Einstein

See What is Cerenkov Radiation?

We are being “politically correct” (a sociological observation) when we change the wording of the “microstate blackhole production” to “Sub Atomic Sized Holes?” To maybe “inferr” the desired differences of cosmological blackholes, versus, what we see quickly evaporating in subatomic-sized to be revealed in a footprint? 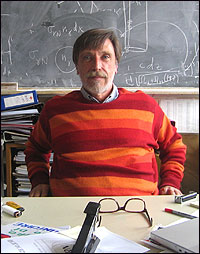 David Kestenbaum, NPR-Alvaro De Rujula is a physicist at CERN, the world’s largest particle physics laboratory. Three hundred feet below his desk, workers are building a massive particle accelerator that will be capable of reproducing energies present just after the big bang.

Let’s pretend that the reporting was not so good back in 1999, and the information we had then was to cause some needless concerns? Good reporting already existed in term of what the Dark Matter was doing. Now it’s okay if someone else saids it, and reveals all the dark matter info with Wikipedia. How nice:)Your credible?

Was there any evidence to think a method was already determined “back then” and has become part of the process of discovery?

At first bad reporting? Producing fear into the public mind?

In recent years the main focus of fear has been the giant machines used by particle physicists. Could the violent collisions inside such a machine create something nasty? “Every time a new machine has been built at CERN,” says physicist Alvaro de Rujula, “the question has been posed and faced.” August 1999

Peter Steinberg, when at Quantum diaries, lead us through this.

The creepy part of these kind of discussions is that one doesn’t say that RHIC collisions “create” black holes, but that nucleus-nucleus collisions, and even proton-proton collisions, are in some sense black holes, albeit black holes in some sort of “dual” space which makes the theory easier.

Alvaro was the one who put “James Blodgett of Risk assessment” at ease in regards to strangelets. Now, could strangelets have been considered a consequence of the evaporation? Does this not look similar? 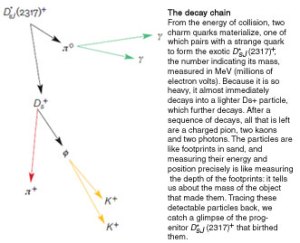 Usually all physicists see are the remnants of a new particle decaying into other types of particles. From that, they infer the existence of the new species and can determine some of its characteristics.

Now everything is safe and cozy with these subatomic-sized holes which would simply evaporate. 🙂 How would you know “what is new” after the subatomic holes had evaporated? Are sterile neutrinos new?

While these paragraphs have been selective, they show that experimental processes are being used and detective work applied.

Current evidence shows that neutrinos do oscillate, which indicates that neutrinos do have mass. The Los Alamos data revealed a muon anti-neutrino cross over to an electron neutrino. This type of oscillation is difficult to explain using only the three known types of neutrinos. Therefore, there might be a fourth neutrino, which is currently being called a “sterile” neutrino, which interacts more weakly than the other three neutrinos.

Any add on experimental processes at Cern with regards to the LHC are reflect in this second paragraph?

“We find,” Chiao said, “that a barrier placed in the path of a tunneling particle does not slow it down. In fact, we detect particles on the other side of the barrier that have made the trip in less time than it would take the particle to traverse an equal distance without a barrier — in other words, the tunnelling speed apparently greatly exceeds the speed of light. Moreover, if you increase the thickness of the barrier the tunneling speed increases, as high as you please.

So while one may think I have some “new process” to make the world happy, it is nothing of the sort. It is interpreting the current theoretical models in regards to current experimental research.

For some reason some scientist think that one can be devoid of this reasoning and apply it to any model/person, while the scientist/lay people already know what is required.

This has been reflected time and again through the interactions of scientist with the public. What is one to think when one scientist calls another scientists devoid of such reason, while he works to develop the string theory model. They don’t like that do they?:)

So do you think that Clifford of Asymptotia is practising what he did not like in Peter Woit’s summation of the state of affairs in string theory? That while criticizing him he was doing the same thing to others? I laughed when I came across the censoring post on Not even Wrong, and why I had to write my new article on Censoring.

I have never seen such “happy trigger fingers” as to deletion of posts that would contradict the statements Clifford could make about another person, or what Peter Woit could say about “Clifford censoring” statements. Peter provides a forum for those who feel shafted who could voice there displeasure?:)

Don’t worry Peter I certainly won’t be crying on your blog. Deletion knows it boundaries in terms of censoring there too.:) But anyway, onto the important stuff. 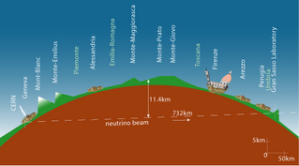 This summer, CERN gave the starting signal for the long-distance neutrino race to Italy. The CNGS facility (CERN Neutrinos to Gran Sasso), embedded in the laboratory’s accelerator complex, produced its first neutrino beam. For the first time, billions of neutrinos were sent through the Earth’s crust to the Gran Sasso laboratory, 732 kilometres away in Italy, a journey at almost the speed of light which they completed in less than 2.5 milliseconds. The OPERA experiment at the Gran Sasso laboratory was then commissioned, recording the first neutrino tracks. See Strangelets and Strange Matter

Tunnelling in the string theory landscape

Now it may not seem so odd that I would place a string theory landscape picture up for revue, and have one think about hill climbers and valley crossers. Would it be wrong not to include the “potential hills” and the thought of the “blackhole horizon?” It was “theoretical appealing” as a thought experiment to me, to think about what could traverse those potential hills. We had to use “a mechanism” to help us understand how the cross over point was being established and “new universes” begin to unfold? New particle creation from such collision processes had to be established first. Both at Cern and with “high energy particles from space.” IceCube was to be the backdrop for the footprint, and resulting Cerenkov radiation from that collision process?

One needed to see such experiment as taking place currently to help us see the jest of where science is currently taking us on our journey’s. So you had to be able to see this process in action back to the insecurities of our ignorance, in relation too, sub-atomic sized holes…ahem…dualites?

You need to be able to capture this “new particle” and the mediums with which this is done, are the barriers that supply the back drop for foot prin,t to what can be traversed in faster then light potentials. Again Gran Sasso, and let’s not forget ICECUBE.

Is it not important to see the experimental process as a natural one?

Bringing the Heavens down to Earth

If mini black holes can be produced in high-energy particle interactions, they may first be observed in high-energy cosmic-ray neutrino interactions in the atmosphere. Jonathan Feng of the University of California at Irvine and MIT, and Alfred Shapere of the University of Kentucky have calculated that the Auger cosmic-ray observatory, which will combine a 6000 km2 extended air-shower array backed up by fluorescence detectors trained on the sky, could record tens to hundreds of showers from black holes before the LHC turns on in 2007. See here

So here we are talking about the “before” and “after” and we had not spoken about the point of exchange here? If I were to tell you that such a reductionistic process had taken us to the limits what the heck could this mean? That we had indeed found the transference point of energy to matter, matter to energy and we say it may be the perfect fluids that supplies us this “anomalistic behaviour” with which we will introduce the GR? Talk about Navier-stokes in relation to the perfect fluid and what and how something can traverse through and come out on the other side?