Elementary Particles in the Decay Chain

Posted on November 8, 2011 by PlatoHagel

What anchors me to reality is the understanding that what will be displayed in the particle chain and here there was some debate in my mind…..literately….. I seem to be questioning whether this decay chain or elementary connection should even be described as a chain. What had me thinking this way is how pervasive we could say energy is inclusive as a statement that we might say the chain of events lists all that is of value in that energy disposition. Cosmic Ray Spallation,  or Jet, seemed fitting to me that such articulation of the collision process would have amounted to so many descriptions of the one thing contained in the dissipation of energy. 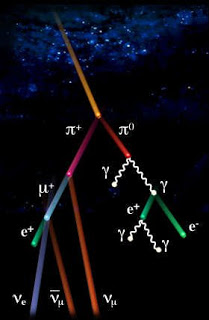 I am not even sure of what I am talking about here…..but as most times my mind seems to be working even while I am suppose to be asleep. I catch the tail end of things and and do you think it is ever clear what it is I am after in my understanding to know that I could write it all down and be so perfecting clear. And as a layman to boot,  how confusing I could make it for others. 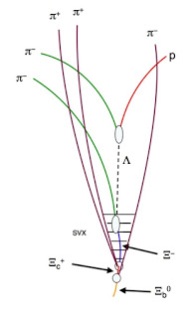 Once produced, the neutral Xi-sub-b (

) particle travels about a millimeter before it disintegrates into two particles: the short-lived, positively charged Xi-sub-c (

) and a long-lived, negative pion (π–). The Xi-sub-c then promptly decays into a pair of long-lived pions and a Xi particle (

), which lives long enough to leave a track in the silicon vertex system (SVX) of the CDF detector before it decays a pion and a Lambda (Λ). The Lambda particle, which has no electric charge, can travel several centimeters before decaying into a proton (p) and a pion (π). Credit: CDF collaboration and Fermi

Well such things start often by the exposure of the many pictures that I have captured on the internet in order to understand that such decay chains are relevant I think in how we see the development of the hierarchy of energy used to determine particle collisions. Of course I am not a scientist so I have to be really careful here. 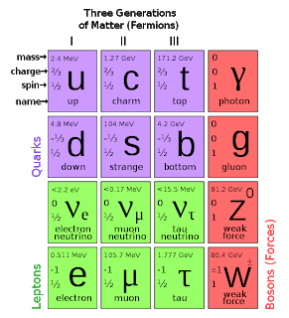 Six of the particles in the Standard Model are quarks (shown in purple). Each of the first three columns forms a generation of matter.

***
So while I am never completely sure in my entirety the journey through science can I say has been with such consistency? Could I say my classroom has been all over the place and my enduring appeal for knowledge could have been the dissemination of so many wrong things.
I truly do not understand at what point that I started to be the convert to a relativistic discretion of the world as a legitimate expression of the universe contained in our undertaking of the decay chain. Is this what the debating is all about in my mind as I wrestle to explain where I have been and where I am going?
So for me what does this all have to do with the basis of how we might look at the cosmos and see such description will help us form a geometrical presence of the universe to know that we are using a relativistic interpretation to actually help us to describe the nature of expression of the universe as Omega.

Friedman Equation What is pdensity.
What are the three models of geometry? k=-1, K=0, k+1
Negative curvature
Omega=the actual density to the critical density
If we triangulate Omega, the universe in which we are in, Omegam(mass)+ Omega(a vacuum), what position geometrically, would our universe hold from the coordinates given? See: Non Euclidean Geometry and the Universe

So while I am working to be consistent with the understanding of dimensional representation of the universe one may see how I have catapulted myself past the euclidean description of the world to move into the relativistic realm of expression based in  geometrical expressions. This allowed me to contained my views on Cherenkov as relativistic expressions detailed in an area that one may of assigned to missing energy events.
Further it may be of some help to understand that by “developing an theorem for particulate expression in relation to dimensional attribution” was significant to me (degrees of freedom) to have such development along side of the development of geometry as a viable approach to furthering our looking into the very nature of the world in which we live.  Genus figure descriptions contained in the valley have to be developed in relation to how we see possible expression, as a sign of the pencil falling one way or how a stone may roll down a hill, as a asymmetrical expression of the way in which the universe began and developed along the decay chain of energy dissipation?
***
See:
Dialogos of Eide