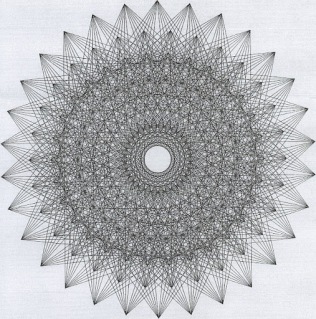 “…underwriting the form languages of ever more domains of mathematics is a set of deep patterns which not only offer access to a kind of ideality that Plato claimed to see the universe as created with in the Timaeus; more than this, the realm of Platonic forms is itself subsumed in this new set of design elements– and their most general instances are not the regular solids, but crystallographic reflection groups. You know, those things the non-professionals call . . . kaleidoscopes! * (In the next exciting episode, we’ll see how Derrida claims mathematics is the key to freeing us from ‘logocentrism’– then ask him why, then, he jettisoned the deepest structures of mathematical patterning just to make his name…)

* H. S. M. Coxeter, Regular Polytopes (New York: Dover, 1973) is the great classic text by a great creative force in this beautiful area of geometry (A polytope is an n-dimensional analog of a polygon or polyhedron. Chapter V of this book is entitled ‘The Kaleidoscope’….)”

I just wanted to show you what has been physically reproduced in cultures. This in order to highlight some of the things that were part of our own make up,  so you get that what has transpired in our societies has been part of something hidden within our own selves.

As I have said before it has become something of an effort for me to cataloged knowledge on some of  the things I learn.  The ways in which to keep the information together. I am not saying everyone will do this in there own way but it seems to me that as if some judgement about our selves is hidden in the way we had gathered information about our own lives then it may have been put together like some kaleidoscope.

So to say then past accomplishments were part of the designs, what had we gained about our own lives then?  What page in the book of Mandalas can you have said that any one belonged to you? It was that way for me in that I saw the choices. These I thought I had built on my own, as some inclination of a method and way to deliver meaning into my own life. Then through exploration it seem to contain the energy of all that I had been before as to say that in this life now, that energy could unfold?

Maṇḍala (मण्डल) is a Sanskrit word meaning “circle.” In the Buddhist and Hindu religious traditions their sacred art often takes a mandala form. The basic form of most Hindu and Buddhist mandalas is a square with four gates containing a circle with a center point. Each gate is in the shape of a T.[1][2] Mandalas often exhibit radial balance.[3]


These mandalas, concentric diagrams, have spiritual and ritual significance in both Buddhism and Hinduism.[4][5] The term is of Hindu origin and appears in the Rig Veda as the name of the sections of the work, but is also used in other Indian religions, particularly Buddhism. In the Tibetan branch of Vajrayana Buddhism, mandalas have been developed into sandpainting. They are also a key part of anuttarayoga tantra meditation practices.


In various spiritual traditions, mandalas may be employed for focusing attention of aspirants and adepts, as a spiritual teaching tool, for establishing a sacred space, and as an aid to meditation and trance induction. According to the psychologist David Fontana, its symbolic nature can help one “to access progressively deeper levels of the unconscious, ultimately assisting the meditator to experience a mystical sense of oneness with the ultimate unity from which the cosmos in all its manifold forms arises.”[6] The psychoanalyst Carl Jung saw the mandala as “a representation of the unconscious self,”[citation needed] and believed his paintings of mandalas enabled him to identify emotional disorders and work towards wholeness in personality.[7]


In common use, mandala has become a generic term for any plan, chart or geometric pattern that represents the cosmos metaphysically or symbolically, a microcosm of the Universe from the human perspective.[citation needed]

So what does this mean then that you see indeed some subjects that are allocated toward design of to say that it may be an art of a larger universal understanding that hidden in our natures the will to provide for something schematically inherent? Our nature,  as to the way in which we see the world. The way in which we see science. What cosmic plan then to say the universe would unfold this way, or  to seek the inner structure and explanations as to the way the universe began. The way we emerged into consciousness of who you are?

The kaleidoscope was perfected by Sir David Brewster, a Scottish scientist, in 1816. This technological invention, whose function is literally the production of beauty, or rather its observation, was etymologically a typical aesthetic form of the nineteenth century – one bound up with disinterested contemplation. (The etymology of the word is formed from kalos (beautiful), eidos (form) and scopos (watcher) – “watcher of beautiful shapes”.) The invention is enjoying a second life today – as the model for many contemporary abstract works. In Olafur Eliasson’s Kaleidoscope (2001), the viewer takes the place of the pieces of glass, producing a myriad of images. In an inversion of the situation involved in the classic kaleidoscope, the watcher becomes the watched. In Jim Drain’s Kaleidoscope (2003), the viewer is also plunged physically inside the myriad of abstract forms, and his image becomes a part of the environment. Spin My Wheel (2003), by Lori Hersberger, also forms a painting that is developed in space, spilling beyond the frame of the picture, its projected image constantly changing, dissolving the surrounding world with an infinite play of reflections in fragments of broken mirror. The viewer becomes one of the subjects of the piece. (Not the subject, as in Eliasson’s work, but one of its subjects.)
See: The End of Perspective-Vincent Pécoil.

Would there be then some algorithmic style to the code written in your life as to have all the things you are as some pattern as to the way in which you will live your life? I ask then what would seem so strange that you might not paint a picture of it? Not encode your life in some mathematical principle as to say that life emerge for you in this way?

Although Aristotle in general had a more empirical and experimental attitude than Plato, modern science did not come into its own until Plato’s Pythagorean confidence in the mathematical nature of the world returned with Kepler, Galileo, and Newton. For instance, Aristotle, relying on a theory of opposites that is now only of historical interest, rejected Plato’s attempt to match the Platonic Solids with the elements — while Plato’s expectations are realized in mineralogy and crystallography, where the Platonic Solids occur naturally.Plato and Aristotle, Up and Down–Kelley L. Ross, Ph.D.