For Newton the universe lived in an infinite and featureless space.There was no boundary, ad no possibility of conceiving anything outside of it. This was no problem for God, as he was everywhere. For Newton, space was the “sensorium” of God-the medium of his presence in and attachment to the world. The infinity of space was then a necessary reflection of the infinite capacity of God.The Life of the Cosmos By Lee Smolin Oxford University Press; New York, N.Y.: 1997, Page 91

Should one think we should dismiss the historical context by assigning comments to the characters of that past? See the “Character of our Heros” for an update on my thinking.I think it is cheap what we can do sometimes, while this history has never been completely told? What is it I mean?

It is a way in which I look at life and the way in which it came together for me. If such a source is recognized that emanates the very constructive phases of all life, then, what was the underlying substance of this creation if it could not be expressive?

David Joseph Bohm (b. December 20, 1917, Wilkes-Barre, Pennsylvania – d. October 27, 1992, London) was an American-born quantum physicist who made significant contributions in the fields of theoretical physics, philosophy and neuropsychology, and to the Manhattan Project.

If man thinks of the totality as constituted of independent fragments, then that is how his mind will tend to operate, but if he can include everything coherently and harmoniously in an overall whole that is undivided, unbroken, and without a border then his mind will tend to move in a similar way, and from this will flow an orderly action within the whole. (David Bohm, Wholeness and the Implicate Order, 1980)

If a shaft of light entering a prism is sufficiently narrow, a spectrum results.

In optics, a prism is a transparent optical element with flat, polished surfaces that refract light. The exact angles between the surfaces depend on the application. The traditional geometrical shape is that of a triangular prism with a triangular base and rectangular sides, and in colloquial use “prism” usually refers to this type. Some types of optical prism are not in fact in the shape of geometric prisms. Prisms are typically made out of glass, but can be made from any material that is transparent to the wavelengths for which they are designed.

A prism can be used to break light up into its constituent spectral colors (the colors of the rainbow). Prisms can also be used to reflect light, or to split light into components with different polarizations.

In optics, dispersion is the phenomenon that the phase velocity of a wave depends on its frequency.[1] The most familiar example of dispersion is probably a rainbow, in which dispersion causes the spatial separation of a white light into components of different wavelengths (different colors). However, dispersion also has an impact in many other circumstances: for example, it causes pulses to spread in optical fibers, degrading signals over long distances; also, a cancellation between dispersion and nonlinear effects leads to soliton waves. Dispersion is most often described for light waves, but it may occur for any kind of wave that interacts with a medium or passes through an inhomogeneous geometry (e.g. a waveguide), such as sound waves. Dispersion is sometimes called chromatic dispersion to emphasize its wavelength-dependent nature.

The Value of Time

I suspect this reflects the expectation many people have that time is not fundamental, but rather emerges only at a semiclassical approximation in quantum cosmology. If you believe this then you believe that the fundamental quantities a quantum cosmology should compute are timeless. This in turn reflects a very old and ultimately religious prejudice that deeper truths are timeless. This has been traced by scholars to the theology of Newton and contemporaries who saw space as “the sensorium” of an eternal and all seeing god. Perhaps the BB paradox is telling us it is time to give up the search for timeless probability distributions, and recognize that since Darwin the deep truths about nature cannot be divorced from time.

The alternative is to disbelieve the arguments that time is emergent-which were never very convincing- and instead formulate quantum cosmology in such a way that time is always real. I would suggest that the Boltzman Brain’s paradox is the reducto ad absurdum of the notion that time is emergent and that rather than play with little fixes to it we should try to take seriously the opposite idea: that time is real.

Configuration space to me would mean a relationship to the way tungsten bar of lead would have through it’s coordinated dimensions as shown below pinpointed the results according to the space that this measure occupies? Now this could mean some totally different to th way I am seeing it, yet knowing full well the scope of the spectrum , the evidence to the contrary of that one wave, would have been the refractive differences shown not only in that Prism, but the elemental consideration as signature by the elements presence. 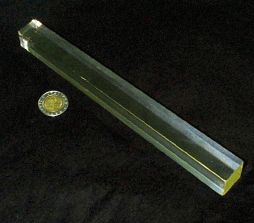 Calorimeters measure the collective behavior of particles traveling along approximately the same path, and are thus naturally suited for the measurement of jets-Dorigo Tommaso

When pushing back perspective it is of course used in concert with how we shall see the events unfold in the cosmos. Any measurement used in the LHC at this time is tied to that same understanding of events as they unfold for us, not only in context of this “whole universe,” but on any subsequent events that happen within context of parts of that same universe.

Bohmian mechanics, which is also called the de Broglie-Bohm theory, the pilot-wave model, and the causal interpretation of quantum mechanics, is a version of quantum theory discovered by Louis de Broglie in 1927 and rediscovered by David Bohm in 1952. It is the simplest example of what is often called a hidden variables interpretation of quantum mechanics. In Bohmian mechanics a system of particles is described in part by its wave function, evolving, as usual, according to Schrödinger’s equation. However, the wave function provides only a partial description of the system. This description is completed by the specification of the actual positions of the particles. The latter evolve according to the ‘guiding equation,’ which expresses the velocities of the particles in terms of the wave function. Thus, in Bohmian mechanics the configuration of a system of particles evolves via a deterministic motion choreographed by the wave function. In particular, when a particle is sent into a two-slit apparatus, the slit through which it passes and where it arrives on the photographic plate are completely determined by its initial position and wave function.

Bohmian mechanics inherits and makes explicit the nonlocality implicit in the notion, common to just about all formulations and interpretations of quantum theory, of a wave function on the configuration space of a many-particle system. It accounts for all of the phenomena governed by nonrelativistic quantum mechanics, from spectral lines and scattering theory to superconductivity, the quantum Hall effect and quantum computing. In particular, the usual measurement postulates of quantum theory, including collapse of the wave function and probabilities given by the absolute square of probability amplitudes, emerge from an analysis of the two equations of motion – Schrödinger’s equation and the guiding equation – without the traditional invocation of a special, and somewhat obscure, status for observation.

See:Newton’s Space was the Sensorium