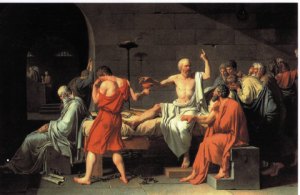 Death of Socrates by Jacques Davidthis picture depicts the closing moments of the life of Socrates. Condemned to death or exile by the Athenian government for his teaching methods which aroused scepticism and impiety in his students, Socrates heroicly rejected exile and accepted death from hemlock. 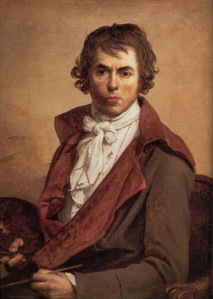 Here the philosopher continues to speak even while reaching for the cup, demonstrating his indifference to death and his unyielding commitment to his ideals. Most of his disciplines and slaves swirl around him in grief, betraying the weakness of emotionalism. His wife is seen only in the distance leaving the prison. Only Plato, at the foot of the bed and Crito grasping his master’s leg, seem in control of themselves.

See:Jacques-Louis David: The Death of Socrates

It was important people understood that even though there is this Glaucon who offers himself as a brother to Plato, it is the very “innate structure within the self” that I point too, as we search and quest our way in the world. It is about Creativity. Opening the doors not only to what has always existed but also realizing that such a stance is the provision for which the lightcone points to the now.

So what is of value is that we understand the dialogue can produce autonomous students whose strength are the understandings given, from compiling all the resources, and thusly, find of value that one may of found the discussion moved further by one more step?

Socratic Method (or Method of Elenchus or Socratic Debate) is a dialectic method of inquiry, largely applied to the examination of key moral concepts and first described by Plato in the Socratic Dialogues. For this, Socrates is customarily regarded as the father of Western ethics or moral philosophy.

It is a form of philosophical inquiry. It typically involves two speakers at any one time, with one leading the discussion and the other agreeing to certain assumptions put forward for his acceptance or rejection. The method is credited to Socrates, who began to engage in such discussions with his fellow Athenians after a visit to the Oracle of Delphi. The Oracle of Delphi confirmed Socrates to be the wisest man in Athens. Socrates interpreted this as a paradox, and began utilizing the Socratic method in order to get his conundrum answered. Diogenes Laertius, however, wrote that Protagoras invented the “Socratic” method.[1][2]

Thus, I present the obvious in what Lee Smolin is trying( a picture perhaps of him writing the “Rovelli name,” as an observable) a place in time, as he has positioned himself amongst particular views. That within every lecture, a telltale sign, that is continuously refined and pushed further, through his articulations. The realities, as he has come to believe of them?

So from within this context, I am referred back to the nature of the article by Bee of, “Every Now and Then,” and the value placed on the Now. I will be posting a new post in regard to “The Problem of Time in Quantum Cosmology,” for further consideration and relevance as extolled by the Backreactions article.

Most Socratic inquiries consist of a series of elenchai and typically end in aporia.

Frede (1992) insists that step #4 above makes nonsense of the aporetic nature of the early dialogues. If any claim has shown to be true then it can not be the case that the interlocutors are in aporia, a state where they no longer know what to say about the subject under discussion.

Aporia (Ancient Greek: ἀπορία: impasse; lack of resources; puzzlement; embarrassment ) denotes, in philosophy, a philosophical puzzle or state of puzzlement, and, in rhetoric, a rhetorically useful expression of doubt.

So moving forward here is the understanding that “Ingenuity can find it’s opening by creating a configuration space” for the “sum over path” and “all probabilities,” while holding, the idea that these would not evolve further in time? I mention the idea I had about the calorimeters and the views in relation to the configuration space earlier, and in this context I see what cannot evolve further other then to look at the relevance in regards to cosmology’s look into what Glast measures are saying, at the time of it’s expression.

These are still held in context of the universe, and is part of the evolution of this universe, whether one agrees with it or not. It is part of the resulting talk pointing out the evidence of “boltzman brains” materializing in that space.