Cartoon Model of a SNR(Supernova Remnants)

When scientists refer to a spherical cow, we are poking fun at ourselves. We are admitting that some of our models or descriptions of things are far more simple than the actual object, like to say that a cow has a spherical shape. The phenomena we study are often complex, and including too many details can hinder, rather than help our understanding. Often it is useful to study a simplified model which contains only the most important general characteristics. Such a model can be more easily studied using numerical or analytical methods and then compared to observations.

As an example of this kind of thinking, say we were aliens trying to understand “humans”, a strange race of beings recently discovered on a small planet orbiting a medium-sized star. We might divide them into two groups, one which grows facial hair (men), one which does not (women). Within each group there is a lot of variety – each human in the first group group can have facial hair in a wide range of colors and textures, for example. However, we think that there is some underlying reason for the gross characteristic of having or not having facial hair. We might then make more observations to try and understand why this is so. These further observations might uncover more similarities (humans in the first group have both an X and a Y chromosome while humans in the second group have two X shaped chromosomes) that are more fundamental. In astronomy we try to do the same thing.

See:Spherical Cows There is a older version here.

Now of course you must know the reason for this article and the subsequent explanation for it. I do expand this article to show some of the current understanding I have as I do my own research, and find how scientific measure is being attributed to our new views of the cosmos as observers. The measure now being reduced to computerizations. 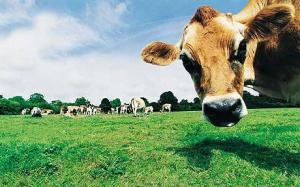 Now I came across this article at Cosmic Variance by reading a blog posting written by Mark.

Now from my perspective as I see often at Cosmic Variance “this method used” not only by Mark, but Sean Carroll as well. It is a sort of poking fun at the news article that was written. Ones I am starting to become familiar with, as I read my local paper. The information from a science perspective is being generated to the public.

Should I become a cynic? Should I blur the lines on scientific method? Hold the scientific method against someone with a religious background, other then a humanistic one, and a sceptic to boot? Naw! I shall not be that way, and the way some others in science deal with each other. I shall respect who they are ,for who they are.:)Not my place to judge them.

Now, is the technique used by these researches in the New Scientist article sound in it’s evaluation? I leave that up to you to decide and continue from the perspective I wish to share on my blog.

This image is from a computer simulation of the beginning of a gamma-ray burst. Here we see the jet 9 seconds after its creation at the center of a Wolf Rayet star by the newly formed, accreting black hole within. The jet is now just erupting through the surface of the Wolf Rayet star, which has a radius comparable to that of the sun. Blue represents regions of low mass concentration, red is denser, and yellow denser still. Note the blue and red striations behind the head of the jet. These are bounded by internal shocks.

See:The Geometrics Behind the Supernova and it’s History

It captures my attention for this reason, and another, which is a trait I myself seemed to fall under. This is in terms of geometrical recognition, as the bubble, circle, whatever your fancy, to illustrate the supernova’s action and it’s remnants distributed into space. I have such examples to illustrate as one tries to marry the theorists to the science in a phenomenological way.

See:Central Theme is the Sun as a related posting and subsequent comment for further elucidation of how we now see in space.

Generally the SNR looks different “in each of these different wavelengths”, just like you and I look different to another human being (who looks at the visible light) then we do to a bee or a snake (who are able to detect ultraviolet and infrared light, respectively).

I am not sure if this is the same with regard to the Glast perspective that is opening up our “new window of the Universe?”

JoAnne sometime ago showed this in relation to the computerize methods used to chart measures on how we may now see the sun for example, in Gamma ray. The “Tscan method” was used in regard to Neutrino research.

Just so you know at what scale most certain.

It is important that the chosen highlighted paragraph written in that comment section and repeated here, be seen in this light, and compared to computerize models attained from our methods of measure.

While the idea here,I am moving away from the spherical cow, by recognizing the way in which observers now see the cosmos as we implement our methods of measure using computerized techniques.

Tscan (“Trivial Scanner”) is an event display, traditionally called a scanner, which I developed. It is a program that shows events graphically on the computer screen.

It was designed to be simple (“trivial”) internally, and to have a simple user interface. A lot of importance was given to giving the user a large choice of options to display events in many different ways.

Tscan proved to be a very useful tool for the development of fitters. A particularly useful feature is the ability to show custom data for every photpmultiplier tube (PMT). Instead of the usual time and charge, it can show expected charge, scattered light, likelihood, chi-squared difference, patches, and any other data that can be prepared in a text format.

Multiple rings of Cerenkov light brighten up this display of an event found in the Super-Kamiokande – neutrino detector in Japan. The pattern of rings – produced when electrically charged particles travel faster through the water in the detector than light does – is similar to the result if a proton had decayed into a positron and a neutral pion. The pion would decay immediately to two gamma-ray photons that would produce fuzzy rings, while the positron would shoot off in the opposite direction to produce a clearer ring. Such kinds of decay have been predicted by “grand unified theories” that link three of nature’s fundamental forces – the strong, weak and electromagnetic forces. However, there is so far no evidence for such decays; this event, for example, did not stand up to closer scrutiny.

Geometrical expression as I have come to understand is my own unique way in which geometrical expression is thought of, and I gave examples here of a discredited person and their research in regards to sonoluminescence, as an example of this feature to map the SNR explosive values. It is only by analogy which I give this relation to help one see this expression in the vacuum of space, as well as leading evolutions in regard to an example of M87 in it’s is unfolding.

The Lighthouse example can be seen here as well, and in this relation Glast measures would help to serve us to see this “new window of the universe” in the way it measures and compartmenting the computerized charting as we observe from this new perspective.

Update:The value of a spherical cow