PURPOSE: To show the two-dimensional standing waves on the surface of a square or circular plate.

Early perception of sound as analogy to the ideas of the WMAP background were forming in my mind when Wayne HU was demonstrating the image of polarizations in B mode. To me its as if one puts on a pair of glasses and based on an assumption of the gravitational waves, then one tends to see “all of it” in this Lagrangian way. 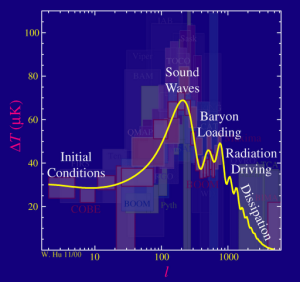 With the discovery of sound waves in the CMB, we have entered a new era of precision cosmology in which we can begin to talk with certainty about the origin of structure and the content of matter and energy in the universe.Polarization

This was the basis of how I was seeing the progression of Webber’s experiments in using the aluminum bars in gravitational wave detection. It was also more then this that I came to the conclusion I did.

Sounding out the Big BangJun 1, 2007 by Craig J Hogan is in the departments of physics and astronomy at the University of Washington, Seattle, US.

Our view of the universe is about to change forever. Since science began, all our knowledge of what lies above, below and around us has come from long-familiar forms of energy: light, produced by distant astrophysical objects; and matter, in the form of particles such as cosmic rays. But we are now in a position to study the universe using an entirely different form of energy that until now has never been directly detected – gravitational waves. 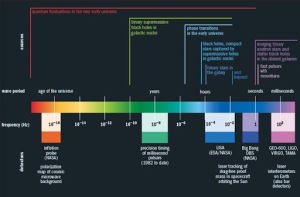 Gravitational waves open up a new window on the universe that will allow us to probe events for which no electromagnetic signature exists. In the next few years, the ground-based interferometers GEO-600, LIGO, VIRGO and TAMA should be able to detect the high-frequency gravitational waves produced by extreme astrophysical objects, providing the first direct detection of these disturbances in space–time. With its much longer arm lengths, the space-based interferometer LISA will, if launched, be able to detect lower-frequency gravitational waves, possibly those generated by phase transitions in the early universe. At even lower frequencies, other experiments will look for tiny signatures of gravitational waves in the cosmic microwave background. Source: NASA. 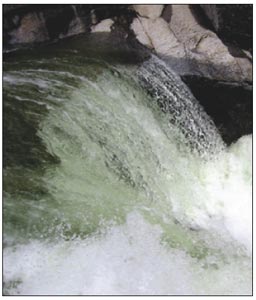 The flow of energy in a cosmic phase transition is similar to that in a waterfall, with turbulence in the cosmic fluid generating a gravitational-wave background today.

Sound and fluidized interpretation seemed very close to me of the way in which such analogy would help us to look at the universe and the spaces in between cosmological locations, as if, in a three body problem relation.

<a href="http://arxiv.org/abs/0902.3796v1&quot; target=_BLank title="The amplitude
of primordial gravity waves therefore provides a way to distinguish between simple models of inflation and alternative proposals for the dynamics of the early Universe.”>The Origin of the Universe as Revealed Through the Polarization of the Cosmic Microwave Background submitted by Scott Dodelson Sun, 22 Feb 2009 14:27:37 GMT

Modern cosmology has sharpened questions posed for millennia about the origin of our cosmic habitat. The age-old questions have been transformed into two pressing issues primed for attack in the coming decade: How did the Universe begin? and What physical laws govern the Universe at the highest energies? The clearest window onto these questions is the pattern of polarization in the Cosmic Microwave Background (CMB), which is uniquely sensitive to primordial gravity waves. A detection of the special pattern produced by gravity waves would be not only an unprecedented discovery, but also a direct probe of physics at the earliest observable instants of our Universe. Experiments which map CMB polarization over the coming decade will lead us on our first steps towards answering these age-old questions.