John Keats talked of “unweaving the rainbow”, suggesting that Newton destroyed the beauty of nature by analysing light with a prism and splitting it into different colours. Keats was being a prat. Physicists also smile when we see rainbows, but our emotional reaction is doubled by our understanding of the deep physics relating to the prismatic effects of raindrops. Similarly, physicists appreciate sunsets more than anybody else, because we can enjoy the myriad colours and at the same time grasp the nuclear physics that created the energy that created the photons that travelled for millions of years to the surface of the Sun, which then travelled eight minutes through space to Earth, which were then scattered by the atmosphere to create the colourful sunset. Understanding physics only enhances the beauty of nature.See:‘Keats claimed physics destroyed beauty. Keats was being a prat’ 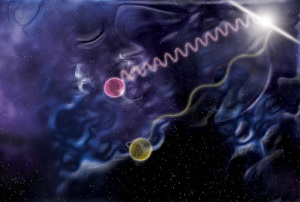 In this illustration, one photon (purple) carries a million times the energy of another (yellow). Some theorists predict travel delays for higher-energy photons, which interact more strongly with the proposed frothy nature of space-time. Yet Fermi data on two photons from a gamma-ray burst fail to show this effect, eliminating some approaches to a new theory of gravity. The animation link below shows the delay scientists had expected to observe. Credit: NASA/Sonoma State University/Aurore Simonnet

“This measurement eliminates any approach to a new theory of gravity that predicts a strong energy dependent change in the speed of light,” Michelson said. “To one part in 100 million billion, these two photons travelled at the same speed. Einstein still rules.“

What I want people to know now is that a question arises about “theoretical conclusions drawn” about joining, “Electromagnetism and Gravity.” This basically what their saying?

Link to tutorial site has been taken down, and belongs to Barb of  http://www.airynothing.com

For some it is not a hard thing to remember when the Sun, or a light has blinded one to seeing what is in front of you, it aligns to the realization, that if one shifts to the right or left, they can come out of the bright directional gaze of emissions from that other time. 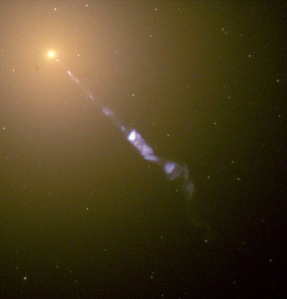 M87’s Energetic Jet., HST image. The blue light from the jet emerging from the bright AGN core, towards the lower right, is due to synchrotron radiation.

Simple Jet Model. A simple model for a jet is a relativistic sphere emitting synchrotron radiation. This simple model hides the complexity of a real jet but can still be used to illustrate the principles of relativistic beaming.

Electrons inside the blob(Crab Nebula) travel at speeds just a tiny fraction below the speed of light and are whipped around by the magnetic field. Each change in direction by an electron is accompanied by the release of energy in the form of a photon. With enough electrons and a powerful enough magnetic field the relativistic sphere can emit a huge number of photons, ranging from those at relatively weak radio frequencies to powerful X-ray photons.-(In brackets added by me)See: Relativistic beaming

So the spectrum at this end reveals Gamma ray perspective that when considered under this watchful eye, reveals views of our Sun and views of the Cosmos of very different ranges used in that spectrum, still, shows the Sun.

It is not so difficult to realize then how much energy is directed that one could say that what we had seen in the light effect can help spotters on ships realize the coastlines during those frightful storms at sea. 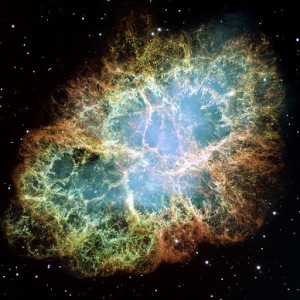 The bluish glow from the central region of the nebula is due to synchrotron radiation.

Synchrotron radiation is electromagnetic radiation, similar to cyclotron radiation, but generated by the acceleration of ultrarelativistic (i.e., moving near the speed of light) charged particles through magnetic fields. This may be achieved artificially in synchrotronsstorage rings, or naturally by fast electrons moving through magnetic fields in space. The radiation produced may range over the entire electromagnetic spectrum, from radio wavesinfrared light, visible light, ultraviolet light, X-rays, and gamma rays. It is distinguished by its characteristic polarization and spectrum.