Levitation Energy: What is it?

You must know, that contrary to what is understood of levitation, I have a view on this that cannot be said less then in complete wonderment, knowing full well the aspects of what science is stating. “I know” with all of sciences tools, there “is” something we do not understand. It would then be assigned to a Metaphysical description here falls short of the scientific definition.

I preserver still, given the circumstance of my youth, and the direction it pushed my life in terms of scientific study and philosophical determinations. What are one’s motivation underpinnings with self and we find the course of life can be set to a degree?

Levitation is an excellent challenge to illustrate how contemplating breakthrough propulsion is different from contemplating rocketry. Rockets can hover, but not for very long before they run out of propellant. For an ideal breakthrough, some form of indefinite levitation is desirable, but there is no clear way how to represent the energy or power to perform this feat. Since physics defines work (energy) as the product of force acting over distance, no work is performed if there is no change in distance. Levitation means hovering with no change in height. Regardless, there are a variety of ways to toy with the notion of energy and power for indefinite levitation. A few of these approaches are listed in the next session. For now, only one approach is illustrated, specifically the nullification of gravitational potential.

Usually this definition is used to compare energy differences between two relatively short differences in height ( r) but in our situation we are considering this potential energy in the more absolute sense. This same equation for potential energy can also be derived by calculating how much energy it would take to completely remove the object from the gravitational field, as if moving it to infinity. This is more in line with the analogy to nullify the effect of gravitational energy. This is also the same amount of energy that is required to stop an object at the levitation height ( r) if it were falling in from infinity with an initial velocity of zero.

Using this equation, it could conceivably require 62 mega-Joules to levitate 1-kg near the Earth’s surface. This is roughly twice as much as putting 1-kg into low Earth orbit. Again, these assessments are strictly for illustrative purposes rather than suggesting that such breakthroughs are achievable or if they would even take this form if achievable. Some starting point for comparisons is needed, and this is just one version.

The elephant and the event horizon by Amanda Gefter

Hawking radiation owes its existence to the weirdness of the quantum world, in which pairs of virtual particles pop up out of empty space, annihilate each other and disappear. Around a black hole, virtual particles and anti-particles can be separated by the event horizon. Unable to annihilate, they become real. The properties of each pair are linked, or entangled. What happens to one affects the other, even if one is inside the black hole.

Given “thought experiments” sometimes it is necessary to understand the close relation with which entanglement issue, an elephant that falls into a blackhole, and a elephant that resides on the horizon, we look to explain what “measurement may mean” as we look at the entanglement.

All of physics as we know it is conditioned on the fact that information is conserved, even if it’s badly scrambled,” Susskind says.

So I ask, is there a way to see “mirror symmetry” as a viable aspect of the entanglement, while we look ever deeper into the blackhole for what can be expected/measured? Information, never lost?

How can one not look at space with such regard and understand that the geometrical tendencies while presenting them in coordinated space, can give a dynamical quality to what was never apparent before. Spacetime, takes on a whole new meaning. Moves the Gaussian coordinates to the realm of “abstract thinking in non euclidean , and presents new aspects for consideration that was previously dismissed and thought arrogant in relation to string theory.

Now, I am no way saying that what is being written here is to be compared, on the basis of the many mathematical insights portrayed in the development of string theory. I have hoped to touch this aspect of “dynamical thinking” at the microscopic level and at the same time, spoken to a macroscopic understandings well.

The Future of the Quantum Mechanical View

Quantum gravity and black holes. Whenever particles are separated further than 10-33cm, the gravitational force between them is very adequately described by Einstein’s theory of general relativity. But when they come closer, the gravitational force becomes strong, whereas gravity is more complicated than gauge theories. Finding a logically coherent theory telling us how particles behave at such small distance scales is a fundamental problem. The most dazzling problem is the question whether these particles will make microscopic black holes. Predicting the behavior of such tiny black holes is a deep theoretical challenge. Or maybe they can’t form black holes? Formulating laws of physics that avoid black hole formation is even more difficult.

How fit and comparative the mind to think that it’s journey in the imaginations could travel space as we know it on so many levels? Microscopic tendencies to see reality in it’s makeup could have been compared to the “powers of ten.”

Gravitational Mass for a Photon

The relativistic energy expression attributes a mass to any energetic particle, and for the photon

The gravitational potential energy is then

When the photon escapes the gravity field, it will have a different frequency

Since it is reduced in frequency, this is called the gravitational red shift or the Einstein red shift.

Note that this condition is independent of the frequency, and for a given mass M establishes a critical radius. Actually, Schwarzchilds’s calculated gravitational radius differs from this result by a factor of 2 and is coincidently equal to the non-relativistic escape velocity expression

A black hole is an object so massive that even light cannot escape from it. This requires the idea of a gravitational mass for a photon, which then allows the calculation of an escape energy for an object of that mass. When the escape energy is equal to the photon energy, the implication is that the object is a “black hole.“

For more see “Time as a measure.

How many of the good scientists can say this themself, that no matter what, with all the avenues of propulsion systems talked about, all the aspects of satellite deployment, where are there such places, that we set our sight on with the habitation of space(L5)? Does it hold to the thinking mind, that we would talk about such comparisons for consideration first? How is it then we should look at space? 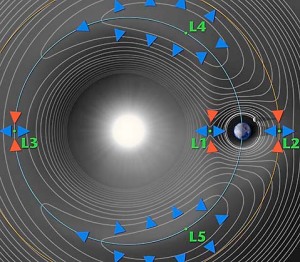 So we understand not only the travels of satellites, but the place and tunnels through which they travel through in that space.

Entanglement and the New Physics

This entry was posted in Inertia, L5, lagrangian. Bookmark the permalink.

2 Responses to Levitation Energy: What is it?