Intent in the Actualized

Return to Home,
Safety seeking,
In my mind,
Continually speaking

Out of the sky,
Eyes Earthbound,
Stalagmite in open cavern,
Fertile lands all around.

The era of design,
Like a Justice Hall,
Women in bonnets,
Mennonite clothes,

In the Town of Williams,
Some time ago,
In the late eighteen hundreds,
Scenery I know.

Before I begin I just wanted to say I am deeply connected to the science today and what I am displaying now may not sit well with scientists.  Those who discount subjectivity as a part of our existence not tried and tested. This subjective existence\experience is real and very individual. How could you discount this from a point of a view of a scientist.  I thought they might say, but yes,  lived with responsibility and in a true validated sense?

So it was in this sense that one could consider the exercise that follows as a science fiction possibility that raises the questions about time and the relationship of the probability distribution of a possible future and the lived past. The present, in becoming, and in this case,  I wanted to look at the past.

The question is that we know that the world of subjective influences and experiences are deeply personal in that they become the life you have live. We work all day and we work all night in the virtual realities.You discover the Intent in the Actualized?

This distinction if not understood within the parameters of the subject entertained it would have lacked the understanding that our virtual reality within the confines of the parameters as being explicit in what we create would have been missed. I can talk about such a park and you might believe the context of such an example if I were to tell you that I was able to remember that at a very young age.

Can an individual experience the actualized past as if viewing a place in our history as part of that history. These questions had crossed my mind over 35 years ago as I explored the dream world. I tried to keep as much of this in poetic form dreaming as I was experiencing it. So I thought it would be nice to write it down in that form.

Now there are many reasons why this area of subjectivity was of interest to me. It was in that what I believed, that not only our footprints left an image in the sand, but our impressions of our life was in the footprints.

Technically such excursions would have been of interest if I could track the ability by some means. So it was not beyond me to think that a tuning could take place by some individuals in helping to reconstruct the past  by going back in time. Not only by Carbon dating. But possibly by some other technical means as well in terms of a super heterodyne solution.

Now I am sure the idea of a fireman and a radio might be trigger in your mind. Aurora flickering in the sky and a son who goes to work on his Dad’s radio?  You will find many references to time travel in this blog because of this idea I have had for a long time about our the ability each of has to visit the historical past as an Intent in the Actualized.

So the idea for me here was about creating a device that could tune into the past? Why then, is it we are not capable in consciousness as a virtual reality?

To activate Thorne plates, the distance between each plate must be less than the width of an atom. The resulting wormhole will be equally small, so getting in and out might be difficult. To widen the portal, some scientists suggest using a laser to inject immense amounts of negative energy. In addition, Thorne believes that radiation effects created by gravitons, or particles of gravity, might fry you as you enter the wormhole. According to string theory, however, this probably won’t happen, so it’s scant reason to cancel your trip.

To take you back one year, the string must weigh about half as much as the Milky Way galaxy. You’ll need a mighty big spaceship to make that rectangle.

Many scientists believe the big bang that created the universe left behind cosmic strings – thin, infinitely long filaments of compressed matter. In 1991, Princeton physicist J. Richard Gott discovered that two of these structures, arranged in parallel and moving in opposite directions, would warp space-time to allow travel to the past. He later reworked the idea to involve a single cosmic-string loop. A Gott loop can take you back in time but not forward. The guide to building your own: 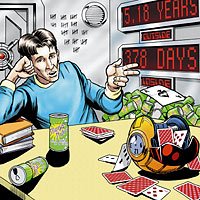 This is a relatively slow method of time travel, and life inside the shell could become tedious.

In essence, a Gott shell is a huge concentration of mass. The shell’s sheer density creates a gravitational field that slows down the clock for anyone enclosed within it. Outside, time rolls along at its familiar pace, but inside, it creeps. Thus the Gott shell is useful for travel into the future only. If you’re planning a jaunt to the past using a Gott loop, you might want to bring along a Gott shell for the return trip. What to do, step by step: 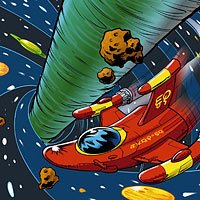 The cylinder must be infinitely long, which could add slightly to its cost.

Mass and energy act on space-time like a rock thrown into a pond: the bigger the rock, the bigger the ripples. Physicist W. J. van Stockum realized in 1937 that an immense cylinder spinning at near-light speed will stir space-time as though it were molasses, pulling it along as the cylinder turns. Although Van Stockum himself didn’t recognize it, anyone orbiting such a cylinder in the direction of the spin will be caught in the current and, from the perspective of a distant observer, exceed the speed of light. The result: Time flows backward. Circle the cylinder in the other direction with just the right trajectory, and this machine can take you into the future as well. How it works: 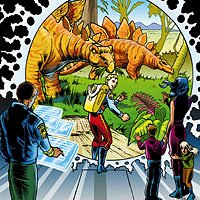 The Kerr ring is a one-way ticket. The black hole’s gravity is so great that, once you step through it, you won’t be able to return.

When Karl Schwarzschild solved Einstein’s equations in 1917, he found that stars can collapse into infinitesimally small points in space – what we now call black holes. Four decades later, physicist Roy Kerr discovered that some stars are saved from total collapse and become rotating rings. Kerr didn’t regard these rings as time machines. However, because their intense gravity distorts space-time, and because they permit large objects to enter on one side and exit on the other in one piece, Kerr-type black holes can serve as portals to the past or the future. If finding one with the proper dimensions is too much trouble, you can always build one yourself:

2 Responses to Intent in the Actualized